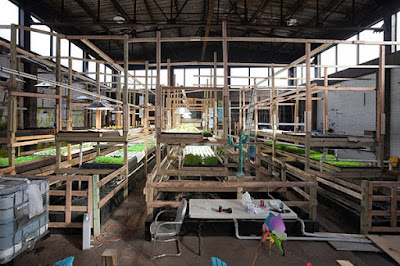 I have been working with a great new friend in Milwaukee, where his pals all know him as Godsil.

Godsil's work, especially at Sweet Water Organics, is integral to Milwaukee's renaissance as this new piece in Salon.com (linked below) documents nicely.

Salon: "Michael told me in an email that he thinks Milwaukee is at the “cutting edge of a potential redefinition of [work and labor] in the 21st century.” Why do you think that is? Other cities — like Detroit — tend to get a lot of media play; is Milwaukee under-recognized in this sense, do you think?

"MC: I think it is. That’s not to say that what’s happening in Detroit isn’t exciting, or shouldn’t be covered. But I think Milwaukee is particularly interesting when it comes to one of the topics often addressed in stories about Detroit and other cities: urban agriculture. Here in Milwaukee, we’ve had Growing Power since 1993; on the heels of the recession of the early ’90s, you have a man called Will Allen taking over a derelict property, and turning it into a viable urban farm that’s now been in existence for close to 20 years. You also have people like James Godsil at Sweet Water Organics, who have brought what Will Allen was doing to the next level in terms of technology (Sweet Water uses “aquaponics,” a system wherein plants and fish are raised symbiotically)."

"I think Sweet Water’s example is particularly useful for two reasons. It represents not only the reclamation of a building itself — they’re in an old Harneschfeger factory building on the south side of the city, and they definitely see the [cultural] value of keeping the building around — but also the idea of bringing productive work back to that building."

"...bringing productive work back"... Thank you Milwaukee. Thank you for your leadership in urban agriculture and new designs for working in liveable cities!